Twitter CEO and Square co-founder Jack Dorsey, who has been actively endorsing Bitcoin and cryptocurrencies has said that their company is now creating a new division which will actively research and create a Bitcoin-based Defi ecosystem.

On his Twitter handle, Dorsey announced that Square will be creating an “open developer platform with the sole goal of making it easy to create non-custodial, permissionless, and decentralized financial services. Our primary focus is Bitcoin.”

Currently, the Ethereum network commands the major share of the Defi market. With Bitcoin-based Defi services, the new solution could be a game-changer as many would actively shift to these protocols. 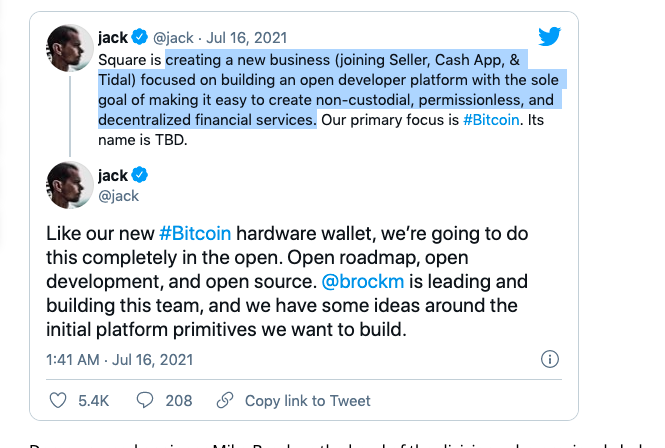 Reports suggest that the Defi market for Ethereum has exploded in 2021. Jack Dorsey has also previously been involved in promoting Bitcoin-focussed R&D and experts are serious about his commitments.

Do You Know How To Locate The Safest Exchange?

Why We Require New Tools And Rules For Cryptocurrencies?

What You Need To Know About Fiat Currency?

Should Investors Be Concerned Over Bitcoin’s Surge? See What The Experts Have To Say!

Bitcoin Settles $31 Billion Worth Of BTC Transactions in One Day

As Bitcoin Moves Towards $60K, Q4 May Observe “Parabolic Moves in All of Crypto”

With the Inflation Increasing, Institutions are Buying More Gold Rather Than Bitcoin: JP Morgan

Stay on op - Ge the daily news in your inbox